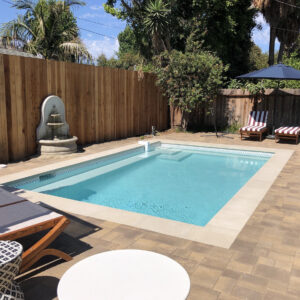 If you’re a prospective pool owner in Southern California, you probably have may questions about how pool usage impacts the ongoing drought situation. We don’t blame you. The drought is a serious issue and it’s natural to wonder if owning a pool is a wise choice. Below, we share some facts about pool and spa usage and water conservation that may ease some of your concerns.

Swimming pools, spas and hot tubs are not water wasters. This fact has been confirmed by the state, numerous water districts and cities.

There are no current state prohibitions on the use of public water to fill or refill pools or spas. This includes the governor’s proclamations and State Water Resources Control Board regulations.

For example, approximately 13,000 new pools were built in California during 2015. The amount of water it will take to fill these new pools is approximately 8/1000 of 1 percent of just the state’s water used for urban purposes.

New swimming pools, spas and hot tubs use a tiny fraction of 1 percent of a city’s or water district’s annual water use. This fact has caused several cities that enacted bans on filling new pools to reverse their actions and prevented others from taking any action relative to swimming pools and spas.

Once built, swimming pools use about the same amount of water through evaporation as the same size area planted in drought-resistant landscaping. If the pool is covered when not in use, the pool will use one-half of the water than used for a drought-resistant landscape, annually. Covered spas and hot tubs lose less than 5 percent of water due to evaporation because they are always covered to keep in the heat.

Self-contained spas and hot tubs use very little water. These units have built-in covers so they are always covered when not in use which means less than 5 percent annual evaporation. The average fill is 400 gallons which can last 6 to 12 months before refilling. Compared to indoor tubs, jetted tubs and long showers, spas and hot tubs are very water efficient.

The swimming pool, spa and hot tub industry supports the use of covers; turning off continuous flow automatic fill devices or replacing them with timed or weather-based systems; use of water saving filters or other equipment; storing water in bladders, temporary pools or otherwise where possible when remodeling a pool or spa; and using new technology to clean chemicals and solids from pool water rather than dumping and refilling the pool.

Everyone in California is affected by the drought, and we all work to be as water responsible as possible. Knowing how and where we can save water benefits us all.

Bottom line-Am I allowed to build a pool even with the current drought? And the answer to this common question is YES. Currently, there’s no restrictions in our state that limit you from building the pool of your dreams.