Automation technology is a HOT topic. In new pool construction, particularly on the custom pools, automation has become synonymous with luxury but not necessarily true, some people consider automation a MUST to have. Being able to control multiple pool, spa, lighting and landscape functions from mobile apps has proven a hook that many pool owners cannot resist.

For wide swaths of the existing pool market, many pools built before the rise of the smart machines are still operated the old fashion way, by turning valves and operating switches. For many owners simple mechanical time clocks still do the trick; as millennials come into the pool-ownership market, automation has been a top priority.

Despite the cost, there are many builders who are still not installing automation on new pools. Younger homeowners especially are interested in the simplicity and convenience of controlling their spa with their phones. Manufacturers have come a long way and Wi-Fi itself has come a long way too. As mentioned above, app-driven control from devices is the contemporary automation calling card, but so too is the availability to expand systems to control LED lights, fire features and multiple pool functions such as , spa modes, service modes, landscape lighting and other tangential features.

Often, clients have no id 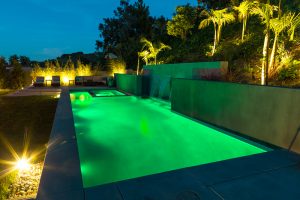 ea these products even exist because no one’s ever explained to them, once they found out that’s possible then most likely they’ll want to go that direction now, or add it in the future.

Automating an existing pool can mean a wide range of upgrades, far beyond simply turning the pump and lights on/off, there are those people who are tired of walking over to the equipment set and turning valves manually.

Pool’s Ready When You Are, turn on the spa on the way home from the gym! Never leave the lights on again. On vacation and forgot to turn off the lights? Do it from the app! Remotely optimize settings for energy and cost savings.

With LED lights, a lot of people don’t know anything about technology and have the expectation that they can control the color very easily, the regular you would do with a regular “white light”. We have to proactively bring up that issue, we have to explain that: when you have LED lights without automation, you have to push the switch up and down multiple times to rotate through the colors, most don’t like that idea. Certainly if they want some kind of light show, like red, white and blue on a 4th of JUly party, they’ll definitely need a control system, we have to educate up front. 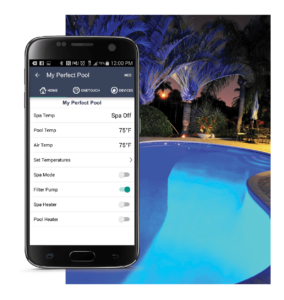 Automation is highly recommended but sometimes is one of those items they plan on doing later in favor on some immediate needs.